Caregivers, I See You

November is National Family Caregiver's Month, and it's been a while since I've written about caregiving, so I wanted to take a few minutes to do just that.

Family caregivers aren't "professionals" per se. While many of us have the skills that only years of experience can provide, most of us didn't choose this role. We're simply family members who have rearranged our lives to provide care for our loved ones.

We carry the weight of our family's needs on our shoulders. Our loads are unbearably heavy. And sometimes we drop it all over the place. But we always gather it back together, find a way to pick it all up again, and somehow carry on.

Everyone tells us we are the strongest people they know - and we are. Even at our weakest. Simply because we must be.

Everyone sees us as these solid figures supporting our loved ones ... but that's really just the first layer.

If you are a family caregiver, I want you to know that I see more.

I see the way you care for your loved one just so, so you can make them as comfortable as possible even if you can't take away their pain.

I see your vast knowledge of your loved one's condition, the way you know exponentially more than any medical professional overseeing their care.

I see you expertly connect tubes, administer injections, and handle all matter of bodily fluid with grace, and without hesitation.

I see the way you've learned to navigate a broken healthcare system to get your loved one the services and equipment they need.

I see all the hours of work and sweat and planning that happens just so you can get your loved one out of the house.

I see the way you smile sadly at the photos your friends post during the summer of their perfect families on their perfect vacations.

I see how you never sleep, not deeply, because you have to be ready to jump into action when needed. And you're always needed.

I see you struggle with self-care because sometimes the thought of taking care of one more person is just too much, even if that person is you.

I see the way you step away from it all and take a moment for yourself in the closet or in the bathroom and let the tears fall.

I see the way you step back in, exhausted but capable.

I see how caregiving consumes you because it demands so much of you.

I see that there's more to you than caregiving, and when you take a little bit of time to reconnect with your own passions I see the joy it sparks.

I see your gratitude, your tears, your heartbreak, your laughter, your anger, your relief, your exhaustion, your frustration, and your deep, unflinching love that all make up the impossibly difficult thing you do called caregiving.

I see you because I am you.

And I want you to see you too.

Family caregivers often take a backseat role when a loved one's injury, illness, or disability is on center stage. But we're often the ones making it all happen behind the scenes. Keeping the production moving forward.

Afterall, the show called life must go on.

If you know a caregiver - whether they are new to caregiving, if they're in the thick of it, or if their caregiving days have passed - please share this.

Let them know you see them. 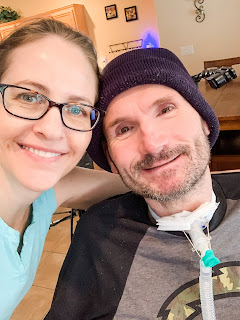 Nine: A Year of Powder Blues and Sunshine Yellows

Even though it's been nine years, I can still so clearly remember the awfulness of that day - July 27, 2013 - the day that started out so perfectly with friends at the beach and ended so horrifically with my husband in the ICU ...

paralyzed from the neck down,

a machine breathing for him.

I'm grateful to have tacked on another year and moved further beyond that day, beyond that first year when everything was so new and so frightening.

And while life is still overwhelming - living with a complex medical condition that requires a constant high level of diligence and care will do that - I'm incredibly proud of how far we've come since those early days when there was nothing ahead of us but despair and doubt that we could ever make a life from the ashes of such devastation.

Year nine has been a mixed bag.

The lows were very low. Multiple hospitalizations revolving around Jeff's recurrent intestinal infection have frustratingly led to only temporary fixes, not long-term solutions. And when the infection is raging, it's painful for Jeff and frightening for us both. Finding medical personnel who have that magical combination of being both able AND willing to help us with the logistics of navigating a system that isn't built for someone like Jeff has been utterly disappointing. Forward progress is slow on good days and grinds to a halt most other days. We've tried so many avenues and have met many dead ends. And that leaves a heaviness that often doesn't show on the outside, but weighs heavy on the inside.

But if there's one major theme that's constantly run in the background of our life the last nine years, it's the importance of being resilient. How, even through the most frustrating circumstances, we have to find a way to keep moving forward.

And that brings me to the highs.

Year nine has surprised us with something new.

Something fun that has helped infuse our days with smiles and laughter.

It all started with a doll ...

Everyone who knows our family knows we love the Chargers. Jeff was born into the fandom, and I became a fan after we met. Last year for Jeff's birthday, I crocheted a doll for him of Chargers quarterback Justin Herbert ... and well, things just kind of snowballed from there.

In a very good way.

Lil Herbie became popular with other Charger fans, and I began making him available through my Etsy shop. Then I joined Twitter where I met a whole slew of fans - collectively known as the Bolt Fam - who are an amazingly supportive community. Some have even become our close friends.

Lil Herbie was soon joined by a few teammates, and incredibly, with help from the Charger community, I was able to get some of the dolls to the players themselves! And I've received hundreds of photos of fans who have received their dolls - taking them to games, taking them on vacation, making them part of their families. All with the sweetest, happiest, most heart-felt messages.

Our family was even featured on an episode of Mills on the Mic, a podcast hosted by the Chargers 2021 Fan of the Year Jen Mills. The highlight of the episode is when Jen showed up at our house with former linebacker Shawne Merriman, giving us all the surprise of a lifetime!

This venture - this something that started out so small for the sole purpose of making husband smile - has turned into this beacon of happiness for all of us: me, Jeff, Evie, even my in-laws. Everyone is involved in some way to help give the Lil Bolts life.

But really, it's the other way around.

Because the Lil Bolts are the ones who have opened up life for us. A new door, set ajar, to let the sunshine in on a life that can often be consumed with shadows. The Bolt Fam community has embraced us and has given us something new.

For Jeff, it's given him a level of joy that helps to counterbalance the heaviness of being the one whose needs put an inordinate amount of stress on our family.

For me, it's given me purpose beyond the grind of being the engine who powers our impossible life.

For our family, it's given us something fun, something exciting to look forward to. Whether it's planning silly videos to make or designing the next player's doll.

And we are so grateful to have it.

I was recently thinking about my Etsy shop name, Yeti or Knot. It's a play on words, a fun little twist on the phrase "Ready or Not." Jeff actually came up with it a few years ago when I reopened and rebranded my shop. And it's perfect because I make fun, whimsical items, and the Lil Bolts fit in so nicely there.

I'm glad we didn't have a warning.

We would have said there is no way Jeff could face life as a ventilator-dependent quadriplegic. And there's no possible way I could take care of him and all his high-level needs for the rest of his life.

it turns out we can.

Thank you to everyone who has supported our family over the last nine years.

We don't do this life alone. 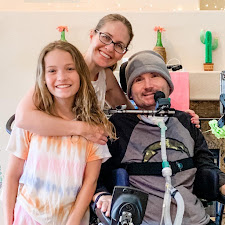 Kristen
On July 27, 2013, our lives changed forever. My husband, Jeff, sustained a spinal cord injury and became a ventilator-dependent quadriplegic. This blog is about how Jeff, our daughter Evie, and I have dealt with life during and since his injury. Even with all of the challenges that come along with life after a spinal cord injury, we are blessed that we're still a family. That we have each other to go through life with. This is our story.